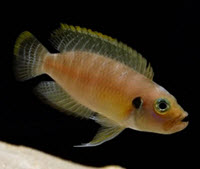 Welcome to my website about cichlids and other aquarium fish. Here you can read about everything you need to know to become a successful cichlid keeper.

Cichlids are fascinating fish that arguable have more personality than almost all other aquarium fish. Most species are easy to keep and not too hard to breed. If you chose to breed a cichlid species than you will able to observe how they care for and protect their young. Cichlids do all they can to make sure that their your survive. This is a trait they share with a number of other species including gouramis and catfish. Most aquarium fish will however not care about their eggs an young once they have finished spawning. Some Cichlids such as the discus take fry care to the next level by producing a mucus that the fry feed of.

Cichlids are more aggressive than many other types of aquarium fish and some species will kill all their tank mates unless they are kept in very large aquariums. There are however a number of species that are suitable to be kept in regular community aquariums. Examples of cichlids that make good community fish includes freshwater angelfish and common kribs. It is very important that you read up on a cichlid species before you buy it and add it to your aquarium. You need to make sure that the species will thrive in your aquarium and that it will play nice with the species you already have. Otherwise you risk buying a cichlid that wont do well in your aquarium or that will end up killing the fish you already have.

Cichlids vary in space from around an inch to more than two feet in length. There are a number of cichlids that are popular food fish. Examples of such species include Tilapia and guapote.

Cichlids inhabit a large number of biotopes in South, Central and Nort America as well as in Africa. There are also 3 Asian species. You can usually make an educated guess about the preferred care of a cichlid if you know which biotope they come from. Two very well known cichlid biotopes is Lake Malawi and Lake Tanganyika cichlids. 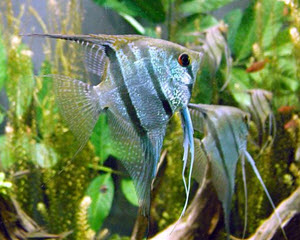 Angelfish is a very popular aquarium fish. It is a very friendly cichlid that will do well in a planted community aquarium. Angelfish can grow rather large so it is important that your aquarium is a 20 gallon high or larger. The height of the aquarium is more important than the length or width.

The angelfish can be aggressive when they spawn and are know to eat small tetras. They will usually be friendly towards all fish that are to large for their small mouths. When they spawn they will chase all other fish away from the area around their eggs.

Angelfish can be found in almost all aquarium store. There are a large number of different color morphs available. Most of them have been developed in aquarium.

There are several different species of freshwater angelfish. 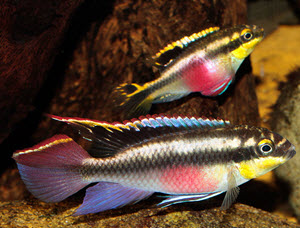 Kribs is another popular aquarium fish. This cichlid species is found in rivers in Central Africa. There are a large number of different krib species available on the market. This text refers to the common krib but most other kribs would also be a good choice for a community aquarium.

Krib cichlids are aggressive to other kribs and it is best to only keep one pair in an aquarium. They are usually not very aggressive towards other species. They are very easy to sex. Females have a red belly that and a different shape than the males.

Kribs are very easy to care for and they are a perfect choice for anyone who want to try to breed a cichlid. It is a good fish to give to children so that they can learn more about fish spawning. They are usually very good parents and will take good care of the fry. You and/or your children can follow the fry as they develop into miniature version of the adults. The pH value in the tank will decide the sex of the fry. It is common that all the fry have the same sex.  Read more about Kribs (External link).